Lessons learned from the weekend's Cyclo-Cross Race #1: It's a workout. A-can't-stop-breathing-think-you're-going-to-be-sick workout. On Peter's suggestion we started with a five lap race. Tough man that I am, I scoffed. Nine minutes later I was slumped over my handlebars in a pile of self pity. The entire race is essentially a monstrous interval workout with constant changes of pace, accelerations and sprints. 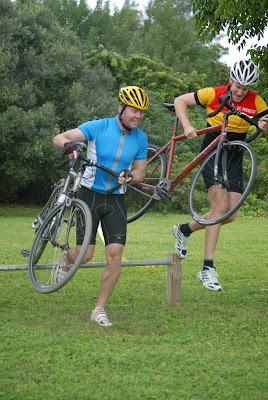 Lessons #2: You really can do a 'cross race on any bike as evidence by Dr. Booth below. Funnily enough, of the eight different styles of bikes present, there was only one genuine cross bike being used. Translation: no excuse to not show up to the next event. 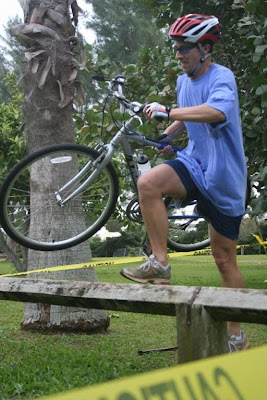 Lessons #3: The format makes for a great spectating event. Since you can essentially run the race in an area the size of a football field people are more likely to come out and support you since they can see the entire race. Secondly, you don't have to bore your significant other when you get home with tales of your exploits - they're there getting bored in real time, but it's O'kay because the course is scenic and the races short. Finally, it becomes a social event. We were fortunate enough that Dave and Zara organized the event and then opened up their house to all with beer and fish chowder afterwards. If you know me, you know I think that occasions like this are the reason I ride.

Lessons #4: On to matters of actual racing, Peter Dunne must have been practicing his mounts and dismounts at home while the rest of us were at work because he's fast. In the individual race, he took off from the gun not to be seen from again, perfectly navigating the off-cambre corners and running up the stair case with ease. Norby grabbed second, and I snuck past Mark Godfrey for third.

Now, no disrespect to Peter, but this fact alone - the sheer thrashing he doled out - is enough to get me out to the next race to try and even the tables.

Peter with full on race face below showing how it's done. 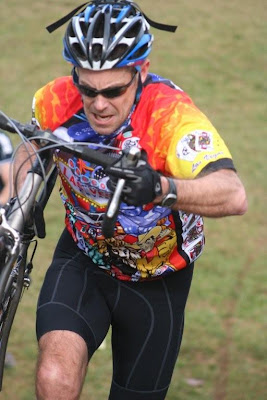 Other things worth noting:
-Mark Godfrey won the junior category and I think he could have a future in this, he was cruising up the grass embankment like it was paved. 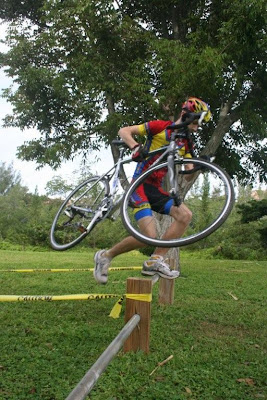 -Boltini came out and did the race on his road bike and road shoes but still managed a smile up the stairs. Or is that a grimace... 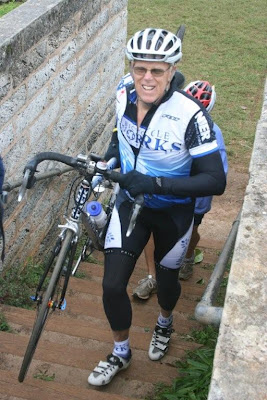 -While there was a point where I thought my single speed was going to get the better of me, I'd like the record to reflect that in the end the relay race was lost in the last half of the last lap because of a dropped chain on Bevis' Campy equipped Moots. It was sweet relief after grinding out my gears at 55 rpms. Schadenfreude with a Bill Murray like sense of timing.

Prizes: I've decided there aren't enough prizes in Bermuda cycling. They don't have to be much - Peter got a four pack, while Dr Booth and I got two - but it does make you race harder. 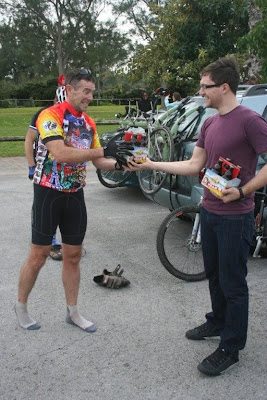 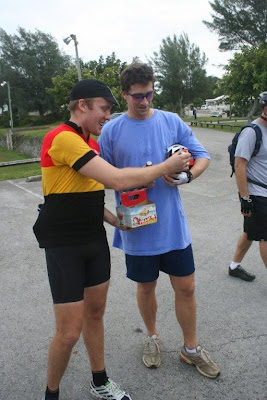 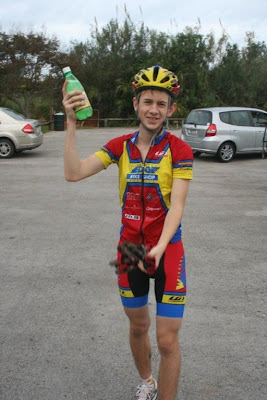 #1 Present of 2009: is a pair of white BG S-Works shoes from my lovely girlfriend. The over the top PRO styling of these made them pretty high on the wish list, but the sock like comfort of them made them a must have.

Ridiculous accessory I may now need: White shoes equals maintenance, and a quick look at my drive train will show that I'm terrible in that department. I'm seriously considering overshoes a la Frank Vandenbroucke. 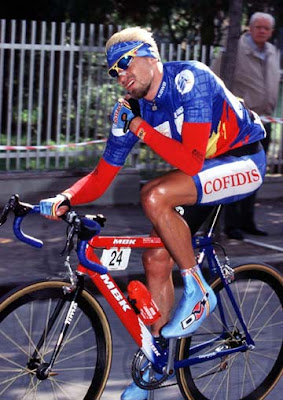 I've never thought about them before, but I noticed (and how could you not notice Paulo's) several pairs on the boxing day ride.

Trend I hope is resurrected in 2010: If there was one fashion trend that defined cycling in the early and mide 90's it was outlandish eyewear worn unabashedly. See exhibits one, two, and three. After a decade of black minimalism it looks like the Gaudí is back in. Oakley's new Jawbones are almost so ugly as to be beautiful and their aptly named 'Retina Burn' pair is calling my name.

Promise to myself I'm unlikely to keep: Go no more than two days without a ride. I want to get fast this year. Consistency = improvement. Nothing else really to say.

Surprise of the 09 racing season: I'm not a time trialist - I don't like them because I am bad at them and am bad at them because I don't do them - so I normally only look at the results to see just how much Garth won by. But for a three week span at the end of the summer this year I was hooked. The reason: the fight for end of season wins between Dave Collins and Mark Hatherly. There were three races and all three were decided by less than four seconds. FOUR SECONDS! Rivalry makes good sport and good sport pushes people harder than what they otherwise would. I'm excited to see what Mark can do in 2010.

Local Race of the Year: This one is really a no brainer for me. It has to be Scott's ride at the National Road Race Championships. i've seen a lot of races in Bermuda, but never a two hour solo move in the wind and rain to seal it. I only had the back of the pack view, but there was carnage in the group with three laps to go because of the unsuccessful attempt to close the gap; I can't imagine the pain involved in holding off that charge but somehow it all came together.

Promise to myself I'm unlikely to keep #2: Drink less in general and the night before 5:30 a.m. training sessions in particular. I'm thinking my strategy for tackling this one is concentrate on quality wine over quantity.

Funniest Proposition of the Year:

Scene: Having a coffee after 30 miles in the wind and rain.

Brian Drea: I felt pretty good just there. Do you want to go around the back of St. Georges, the Lighthouse and back?
Me: No.
BD: Oh come one. Tell you what, I've got some Fig Newtons we can split. What do you say?
Me: Well that changes everything.

Rode just over 60 miles that morning.

Revelation of the Year - Equipment: I recently asked Chelsea for a handbuilt front DT Swiss 240 and am amazed at the difference it makes to my bike. I just rolls so smooth. I can't go back to anything else now, and if anyone else is looking for a bulletproof set of training wheels, look no further.

Obscure Bike Builder Obsession of the Year: I just think that Sacha White's Speedvagen bikes are so cool. Metal bikes are making a comeback and he's leading the charge. 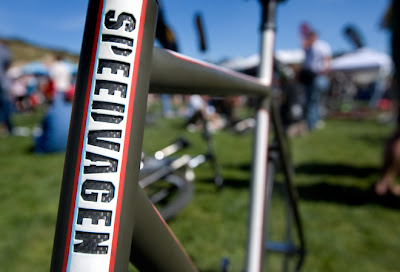 Revelation of the Year - Product: Some things in life are worth debating (Monica Bellucci or Scarlett Johansson, the Giro or the Tour) others are not. On the topic of the best cycling blog, it's firmly in the latter camp: Belgium Knee Warmers is the best. Period. They are the keeper of all things PRO and their long standing love of Frank Vandenbroucke is ispiring, the origin of the title is explained here:

true hardmen opt to forego the knee or leg warmers and instead choose an embrocation to cover the knees, which provides warmth for the legs chemcially and keeps the blood circulating and the muscles as supple as possible. This embrocation and the sheen created is affectionatley known as “Belgian knee warmers.”

Of course I was curious, so Dave brought some Mad Alchemy embrocation down from Canada. It's only been a week, but this stuff is great. It's like a cup of coffee for the legs and makes getting out the door on those cold morning just that much easier.

Photo of the Year: 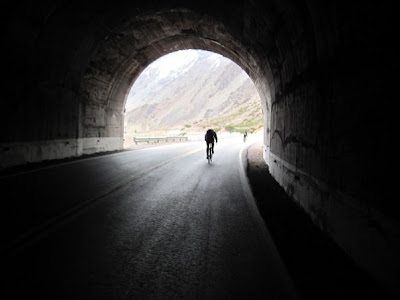 Bevis Tetlow and Phil Mace cycled 1836 K's between Buenos Aires and Santiago earlier this year. Geography majors out there will know that this meant a) crossing the Andes along the way, and b) Southern Hemisphere meant the ride was during their winter. It was a bad ass ride and they raised a ton of money for charity (as well as giing themselves a great excuse to buy new bikes). Their photos are incredible, and I probably could have chosen any of them to be the year's best, but I liked this one.

Promise to myself I'm unlikely to keep #3: Stretch every day. I'm told it helps, but all I want to do after a ride is drink coffee.

Exceedingly Optimistic 2010 Event: I don't know if anyone's noticed, but Tom - Mr Grand Prix Bermuda - Barras has found a ride with the new UK Raleigh cycling team. Raleigh used to be a powerhouse team in the European peleton. Their ambitions are a little lower going into 2010 - more Continental Division I level - but they've signed some great young riders. Maybe Tom will convince the managers to have an end of season jolly around Hamilton and do some racing too. Just try and imagine if racers still did this after particularly grueling stages of the Tour: 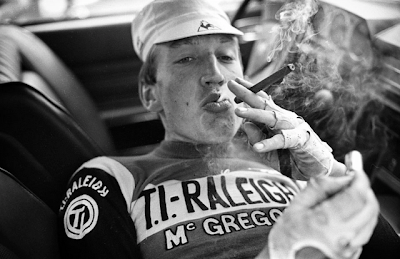 Revelation of the Year - Racing: The Junior program. The juniors riding now are good. Really good. It's great to see the development and I can only hope that they stay in the sport long enough to become great. 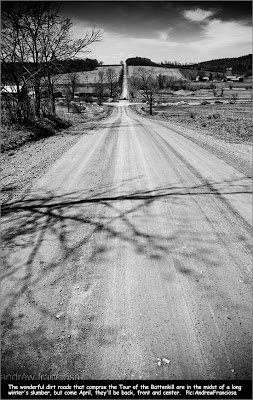 How does an image of an empty road manage to convey fear? This is the halfway point in the Tour of Battenkill. I think plenty of training is in order.
Posted by Eddy at 10:11 AM No comments:

Specialized Roubaix....Christmas is just around the corner.... 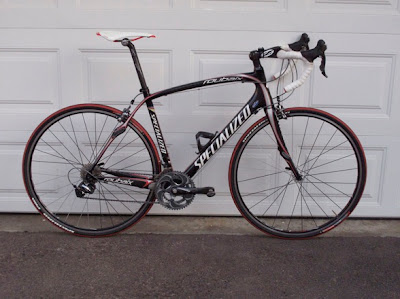 Looking for a last minute gift and have $5,000 to spare? If you do, this may be the bike for you. For reasons explained here, I think that most bike reviews are a waste of time. The exception to the rule seems to be Red Kite Prayer, who's Padraig has more experience and gives more thouught to reviews than I've read anywhere else. He's also given a lot of thought to the scoring process:

I’ll be scoring bikes on a 100-point system. It will take into account every facet of the bike: price, design, effectiveness for given consumer, parts spec, fit considerations, handling, weight, stiffness, road feel and even availability, the idea being a $2000 bike has the same chance of scoring 100 points as a $10,000 bike if it accomplishes its consumer-oriented goals.

I'll admit that I've never been a fan of specialized, but a score of 98/100 and the final comments of,

In a world dominated by bikes made for American crit racing, the Roubaix is one of the most intelligently designed bikes I’ve ever ridden. Easily one of my all-time favorite bikes.

I may have to reconsider.

Click here to read the full review, or talk to Chelsea to find out more.
Posted by Eddy at 7:30 AM No comments:

Question: Is the Corporation of Hamilton the most incompetent body in Bermuda?

Points of Discussion: Internal and petty power struggles over voting and eligibility, private and undisclosed meetings and a "Buy Bermuda" campaign that asks nothing of the shop keepers and everything of the consumers.

The Nail in the Coffin: The terrible state of the roads in the City. Just when I thought there was a light at the end of the tunnel with the paving of particularly bad sections - including Burnaby Hill which we race up - I saw them jack hammering up a section of pavement that's not even a month old. 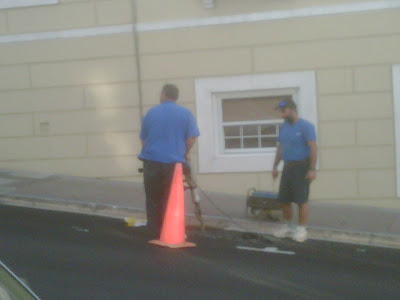 I know that it is possible for the roads in Bermuda to be worse, but I'm not even asking for repairs, just stop messing up the pavement that is already messed up enough.
Posted by Eddy at 4:50 AM No comments: