I'm an in-the-closet-fan of knuckle tattoos. Not that I want my own - I don't like pain or tetanus and don't know how they'd go over in the office - but they're cool. They require dedication, no doubt about it. Dedication is a prerequisite for any serious cyclist, so I can respect the commitment. On a spectrum they're just slightly above getting out the door to do intervals in the rain.

That's why I was so excited by the Knog gloves Chelsea has brought in over at Bicycle Works. They're leather gloves, great quality and have "LOVE" and "HATE" across the knuckles. Here too, I think any cyclist who's ever done a time trial can relate to the inspiration here. On top of that they're ironic and it's rare in any setting that you have clothes that require both attitude and a sense of humour to pull off.

It's easy to get carried away with cycling gear and outfit yourself in carbon soled shoes, $200 bib shorts and the rest. I get sucked up in it all too, but think I may get a pair of these as a reminder to keep it real and leave the pro stuff to the pros. 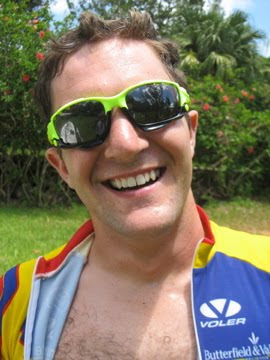 Dave Collins is leaving the island today to go back to school and I think that Bermuda cycling will miss him. Not because he's fast - though he is - but because he brought such a fresh attitude to the race scene here.

Want to do the mountain bike series but don't have a mountain bike? Easy, tear it up on your day-glow cross bike. Never done a road race, win your first ever and lap the field in the process. Then five more. Straight. Then bag an A category crit. No power-meter, Carmicheal plan, no tactics, just good hard riding.

It's not to say that the man is without flaws. He's the one that chased down his own team-mate's break on May 24th. Ask him why he did it and you get the same answer you get when you ask why he went so hard he now can't get his shoes off: "I don't know, I just wanted to ride hard. So I did." It's refreshing. So many racers spend time saving themselves for some other race in the future instead of chasing the group going up the road. I'm a victim of this too of course, but I got into cycling because when I was a kid it just felt so good to ride my bike, to go fast, get lost and have fun. Dave rides like a kid, and that spirit is infectious and to me is what cycling is all about.

He's planning on racing in BC and doing the cross scene there over the winter (and introducing to Bermuda in the future?). He'll be contactable and reporting when he can on his races at his site www.self-inflicted-suffering.blogspot.com.
Posted by Eddy at 2:02 PM 1 comment: 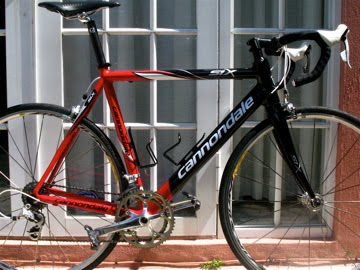 What I love about my bike is that I don't particularly love it. Let me explain. It's not my bike equivalent of a death row meal in the way that an IF Corvid, Prince, or a Parlee Z1 are. Those bikes are all beautiful, hand crafted, fast and pull at the heartstrings. They have a relationship with the rider that is practical and sentimental. That's great, but it's not what I want or need. I want a tool. A bike to log training miles on. Not let me down on Saturday rides and town sign sprints (which I never win, but that's not the bikes fault). So it's not a dream bike, but it scores higher on the emotionless utilitarian checklist than more expensive bikes.

My requirements are pretty simple: I want the bike to be stiff, which it is. It's front half is carbon with a huge head tube. The rear half is aluminum with massive, simple round chainstays. Bike snobs are a fickle bunch and use 'sexy' as an adjective to describe a the chainstays of a bike like the Pegoretti, Love #3, but never mention a CAAD 9 in the same breath. They should, these are awesome. It's plenty stiff for my needs, but that's not saying much, so I defer to Kent, who raves that it's the stiffest riding bike he's ever been on. It could probably more comfortable, but the reality is that the roads here are pretty good so it's not an issue. 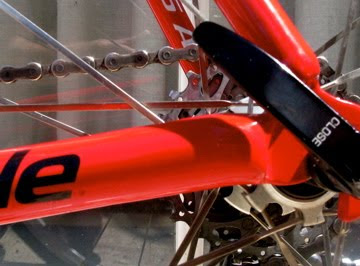 Affordable. At $2,500, my Rival equipped bike is less than half the cost of a top tier frame or a nice set of wheels. Included in that price is one of the best warranties in the business against defect or crashing. And while Rival is entry level, the frame is the exact same one that has had Tour, and Giro success. It's a great bike, but if I crash it, I'm not going to bankrupt myself.

Build Kit. Mostly good here. I was an early convert to SRAM and plan on writing more about it later so I'll keep it short here. The Rival groupset just works. It's lighter than Shimano Ultegra SL and about 35% cheaper: and it's their third-tier groupset below Red and Force. It's still good enough for the pros - take a look at the left crank arm this Cervelo rider is using. I know this second example is FSA, but if Cancellara thinks aluminum is better than carbon for cranks then I believe it too: check it out. Elsewhere on the bike at this price point it's rare to get a set of Mavic Aksium's which while not the best wheels out there haven't need a truing in two plus years. The only disappointment in the build is the FSA bars. They're too deep which forces your position to alter too radically when on the drops and they have an ergonomic bend without a sweet spot. Fortunately Cannondale - and seemingly the whole industry - is moving away from un-Godly ugly "ergonomic bend" to shallow curved bars (there's a joke here about how I like my bars like I like my women, but I won't go there). The best thought process on the pros of traditional bar shape can he found here.

Finally - and I think this is absurd but necessary criteria - it has PRO race heritage. Like I said, cyclists are fickle and it doesn't matter how good a bike is because the fact is that if pros aren't riding the brand it loses invaluable credibility. Just two or three years ago Colnago was the bike to have. It had the history, was one of the first carbon manufacturers and was being ridden by Rabobank and Milram under such stars as Freire, Zabel and Pettachi. But 2008 was the first time in 30 years without representation in the peleton and in its place Specialized, Cervelo and Scott have devoured market share. Getting back to the point, Cannondale has been in the PRO ranks for almost 15 years now and I can't think of another brand save Pinarello that can say the same. It's been ridden in techno-colour by Gotti and Cipollini, Cunego, Soler,'s polka-dot year and this years Liquigas stage race rich team of Nibali, Krueziger, Pellizotti and Basso. That's 15 years of PRO feedback on how to make the best bike possible and that's got to count for something

There's a certain satisfaction at getting a bike that performs at a high level without getting to the point of diminishing returns on cost. To use a terrible term, the System Six has great bang for buck, rivalled only by the Cervelo S1. It's a throw down race bike at an everyman's price. It's not to say I don't want the $6K work of art; there is something incredibly un-romantic about appreciating a bike for it's sheer practicality. I'm sure that one day I'll suffer a mid-life crisis and purchase a bike that I love and can't afford. Picking the right one is something I can think about while I'm logging many, many happy miles and slogging through races on this bike and ones like it.

This has got to be a co-incidence. Last week while looking up the Rapha Continental update I noticed that the hospitality in Montana was decidedly Bermudian. Okay, they call it Ginger Rum and not Ginger Beer, but nobody's perfect. 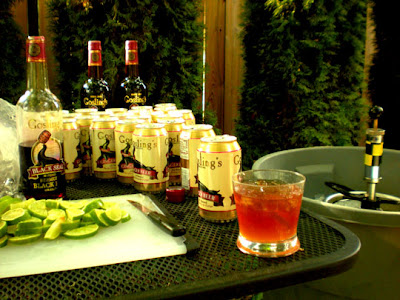 Anyway, it got me thinking that the competition of summer racing has taken this element out of my riding. To me, winter riding is all about long slow rides while enjoying good conversation that often finishes with a beer in hand before I'm out of my kit. Some of my best winter memories this year involved post ride drinking with Brian where entire bottles of champagne are consumed in-thirst before noon. Somehow, even though the rest of the afternoon is spent napping after a huge breakfast and one glass too many the day still feels like a success because I went for a ride. But now in an effort to get to the top of hills a fraction faster or hold the wheel a little longer, conversation on the bike is more grunts and huffs and the only drinking is HEED and water.

I like the fitness that comes with riding all summer, but as August drags on I'm getting tired and looking forward more and more to the slow days of winter and dark beer.

I've gotten distracted from my original purpose. I thought it was cool that Gosling's was the drink of choice for the Continental. But it was awesome to see a Bermuda write-up by Charlie Pearch on a reputable site about a race that I took part in. You can read it here yourself: Rapha in Bermuda. Graeme and Garth both get appropriately sized up as the locals to keep an eye out for. Peter gets a nod his junior efforts and Mark Lombardi gets special mention for his race face. I thought the Father's Day race was great, and something I'd like to see repeated next year, congratulations again to Rodney and Kent for their awesome ride that day.
Posted by Eddy at 8:04 AM No comments: 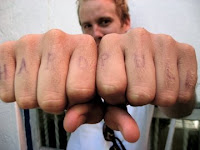 Doing a Century ride in Bermuda isn't the greatest: the route is the same route you always do, you just do it again and again and again. What the ride lacks in adventure, however, it more than makes up for in the sheer element of difficulty that the heat adds. Where we thought we'd see the whole island on a beautiful day we instead met every gas station worker from Dockyard to St. Georges filling up on water or just standing in front of the opened freezer doors. Along Middle Road, Paget I seriously worried that my kidneys were failing. South Shore, Smiths I was wondering if Dave would notice if I just reached out and grabbed onto his seat post for awhile. Then finally, on the last two miles I rode up McGalls hill entirely on the wrong side of the road just for the relief of the shade. I was desperate. 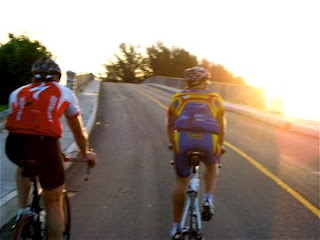 The ride To Dockyard was beautiful; a gentle breeze, sunrise over the ocean. We even had Phil Mace acting as our very own derny for the first 45K. 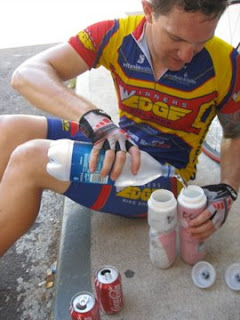 The routine of the day. 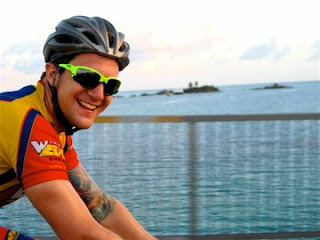 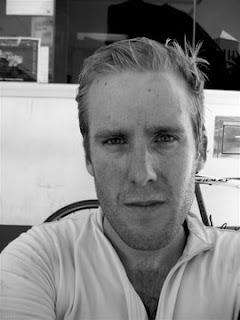 This is what hot looks like, Dave never seemed to get there. 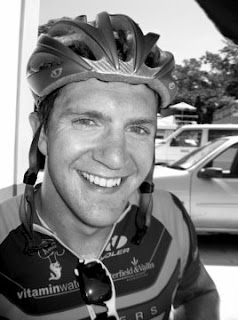 I often joke that I ride early in the mornings only because I like the fresh coffee at Rock Island. By the same logic it wouldn't be a stretch to say that I did this ride for the feast that Dave concocted. A slow Moroccan roasted lamb shoulder days in the making, with a ridiculous serving of cous cous and chickpeas. A thing of beauty. Oh, and beer, and wine, and a float in the sound with noodles for desert. It really was all worth it in the end. 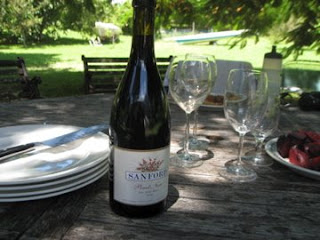 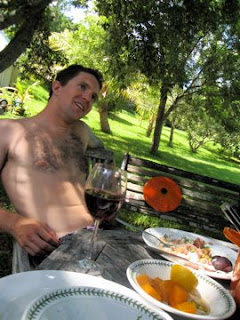