When I was a student I was poor. So poor that my 4th year job folding laundry was a promotion from working as a Subway Sandwich Artist earning $7 an hour before union dues and taxes where taken out. A whole day of work would get me home with $50 Canadian (and a backpack full of smuggled out subs to 'subsidise' my salary) and my bike reflected my bank account.

I had an aluminum Specialized M2 with such a ramshackle mix of components that a store I'd dropped it off to actually reported it to the Police as stolen. My ride was the bicycle equivalent of a chop shop job.

Three years later I got a badly scratched Eddy Merckx frame off of Ebay for $306. During the last five minutes of the auction as the price ticked upwards I remember being really nervous: 'if this thing goes above $310, I'm going to have to back out.' That was my economic line in the sand, across which would have meant self imposed fasting for longer than I'd have liked. (As it was, front derailers were incompatable between frames - clamp on vs braze one - and that non-existent $46 meant 18 months of small ring only riding).

After getting a real job one of the first things I did was buy a new bike. Shortly after that I started riding a lot less as life (read job) got in the way. That resulted in a relationship that's likely universal to all un-sponsored cyclists and graphed below: 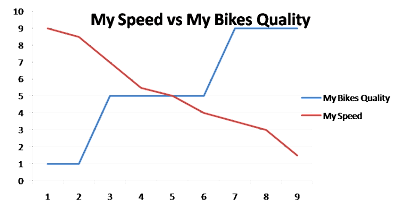 It paints an ugly picture, and since the idea of downgrading my bike is crazy, I'm going to have to work on the other metric here.

I'm thinking of this because I came across this great photo of Juan Antonio Flecha the other day as a kid. 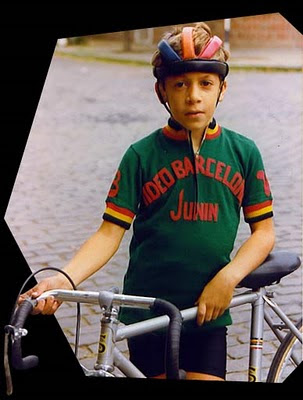 I love this picture. Look at that top tube, it comes up to his hips with the saddle slammed all the way down he must have had to jump off when coming to a stop. Stopping would have been a bit of a problem though, he's only got one brake on there! The leather helmet, the wool jersey a size too big. It's classic stuff. He must have really like riding to go around like that. But hey, now he rides a Di2 Pinarello Dogma.

Like I said, unless you're PRO I think this is the all but inevitable life course for the average cyclist. I only wish that while I was out trying to rectify my bike:speed ratio, Dominique wasn't reminding me how cool I used to be as he flys by on his own borrowed bike.
Posted by Eddy at 1:18 PM No comments: