The team got the first win of the season yesterday. Also won the bunch gallop for second, so it was a satisfying day all around. Dr. Drea went with about 600 meters to go and managed to hold off the field for a well deserved win. Nothing else to add and the picture does the win more justice anyway. 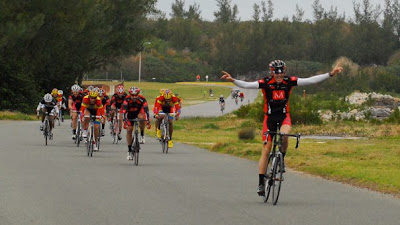 We took some team photos after the race, and I think Phil must have glammed them up a bit as we all look like we're fresh from the tanning salon. 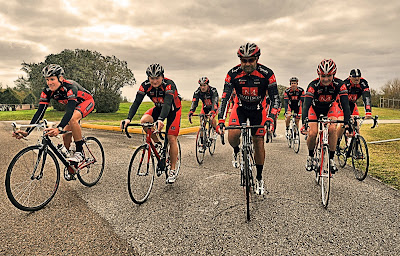 Rode home, crawled up the 18% wall that is Brian's driveway, had some belgian beer with breakfast before the first barbeque of the season with the lovely girlfriend. Kind of a perfect day.

One final note on the below photo from Liz. I know Elliot is a lawyer now, but he's still PRO in my eyes and every time I ride with him I can't help but think "this guy rode the Giro!" 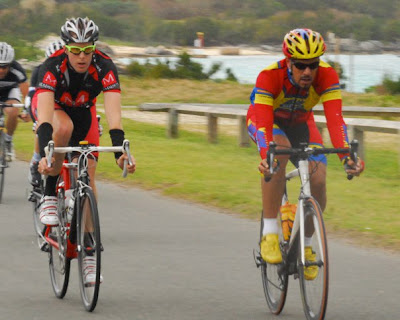 It's the start of a new racing season (more on that later) which has me thinking about new racing bikes. There were several new ones at yesterday's start line. Steeds that had been put together over the winter, polished and shined up to be brought out to impress and maybe inpire more dedicated training. I love my bike, but I can't - and really, what man can - help thinking about a new one.

Obviously, in a money is no object world I can think of a lot of nice bikes I wouldn't mind riding, but I'm going to try limiting this post to bikes at $3,000 or under. Cheating in a couple of areas, I'm going to assume that existing race wheels can be swapped over, saving money there. Saddle too.

#1. I keep coming back to Cannondale's CAAD range. I just don't think that from a value for money perspective that it can be beat. Sure, it's aluminium, but I think a good metal bike is better than a bad carbon bike. It's also less likely to die a sad death in a crash. The CAAD9 4 version is equipped with a mix of Sram Rival and force and has a BB30 bottom bracket - all for $1,800. That price leaves you plenty of room to swap in some nice bars, stem and seat post and still be right around two grand. Throw on your own wheels and it's ready to go. I found these two online that have been nicely speced. 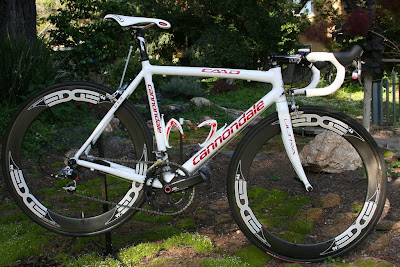 Can't tell which I like more, the white or the black... 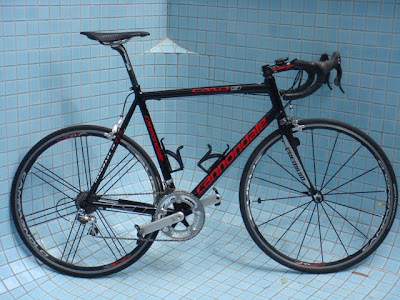 #2. Ridley Damocles. This one is a little more, but still a good deal. Before I say anything else I going to cite two references for this bike. 1) Brendan Quirk, the man at the worlds best bike shop chooses this bike to ride from all the bikes available at his impressive store, and equips their semi-sponsored team with them. 2) Pozzato rides for the Ridley sponsored Katusha, and of all the bikes available chooses and wins on their 'third tier' frame. 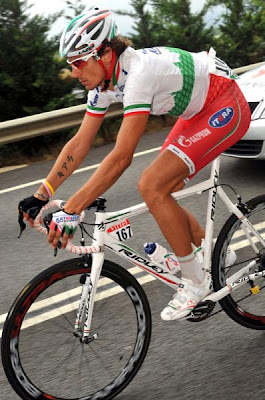 It's a very cool bike, and if you buy it without wheels and with Sram Rival and 3T bars, stem and seat post it's going to come in right at $3,000. 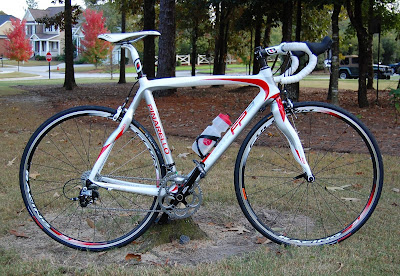 #4. Willier Mortirolo. This frame is going for $1,200 right now and while it's slightly heavier due to less expensive carbon fibre, it shares a lot with the Le Roi model that took Ballan to Worlds victory in 2008. Again, go with Rival and this is around $2,700. Or, with some savings gained from the frame's price spring for some Campagnolo Athena 11 speed and keep the Italian theme going. 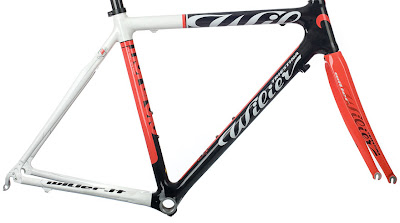